With an almost unreal but beautiful landscape shot of an ice-covered lighthouse on the island of Rügen, photographer Manfred Voss from Scharbeutz has won this year's CEWE Photo Award. In line with the motto "Our world is beautiful", the professional photographer prevailed among 606,289 entries with his sensational winter motif and accepted the CEWE Photo Award 2021 at a festive awards ceremony in Timmendorfer Strand, close to his home town. At the same time, SOS Children's Villages worldwide were delighted with this year's record donation: 60,628.90 euros will go to an educational project of the children's relief organisation in Haiti. 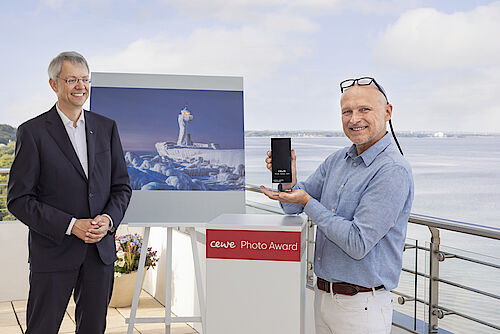 After a period marked by a pandemic, the motto of the CEWE Photo Award "Our world is beautiful" has a special significance this year. The popularity and the highest number of participants to date in the world's largest photo competition are all the more impressive: photography enthusiasts from more than 170 countries submitted a record number of over 600,000 motifs. "It is more important than ever for us to celebrate the beauty of the world and to get people excited about this beauty in all its facets," says Dr. Christian Friege, Chairman of the Board of Management of CEWE and member of the seven-member jury. "More entries than ever before and an incredible range of photographic skills - the CEWE Photo Award 2021 will go down in our company history as a record photo competition," he comments on this year's competition.

Regional award ceremonies for the category winners
After the gala planned in Berlin for the award ceremony of the CEWE Photo Award 2021 had to be cancelled due to Covid-19, CEWE decided to honour the overall and category winners individually. CEWE kicked off the regional award ceremonies in Timmendorfer Strand, home of the overall winner Manfred Voss. The professional photographer not only convinced the jury in the "Landscape" category with his shot of the frozen Sassnitz lighthouse on the island of Rügen, but also received the prize for overall victory.

"It feels absolutely great, almost unbelievable, to have won the world's biggest photo competition in the end," said Manfred Voss on the occasion of his victory. "The motto "Our world is beautiful" could also be called the motto of my photography: I consciously try to capture the beauty of our world in pictures." And asked about the choice of his photo, Voss said: "I particularly like the transience and the associated uniqueness of the motif in the picture. It was impressive to see what a beautiful ice sculpture nature has formed from this man-made lighthouse."

CEWE Chairman of the Board of Management and jury member Dr. Christian Friege presented the award to the lucky winner directly at the Baltic Sea, in front of his home backdrop. In their final statement, the entire jury was unanimous: the photo was convincing both because of the adventurous story of how it came about with the great challenge of icy temperatures, because of the harmonious, luminous colours and because of the excellent photographic technique. This year, the jury was presided over by "World from Above" photographer Yann Arthus-Bertrand as well as Christie Goodwin, Ulla Lohmann, Martin Rak, Kai Pfaffenbach and Petra Horn. In addition to the official CEWE Photo Award, Manfred Voss is delighted about a total prize worth 25,000 euros, including a travel voucher, new photographic equipment and photo products from CEWE.

The donated amount will benefit an educational project in Haiti. "We are convinced that the donation will be particularly useful for the education of children in crisis-ridden Haiti," says Thomas Mehls. On the grounds of SOS Children's Village Santo near Port-au-Prince, the donation has been used to add another school complex to a primary and secondary school. A total of 14 new classrooms have been built so that 500 more children can attend school than before. A total of over 1,000 pupils will then attend this school.

You can find more information at www.cewephotoaward.com